My fantastic trip to the Emmaus World Assembly

Companion Gary shares a blog about his fascinating trip to the Emmaus World Assembly in South America.

I’m Gary, a companion at Emmaus Mossley, and I recently attended the Emmaus World Assembly in Piriapolis in Uruguay.

The Emmaus World Assembly should have been in October 2020 but had to be postponed due to the Covid-19 pandemic. In early 2020 I fundraised to help towards the costs of the trip, collecting donations from our kind supporters to enable me to go. Two years on, I finally had the opportunity to go and be a part of it.

I had a fantastic time there and met lots of people from, not just Emmaus communities in the UK, but from all over the world. There were people from Africa, the Americas, Asia and Europe, and it was a fantastic experience, speaking to all these different people, talking to them about their Emmaus groups, what they do and how they differ from ours. Some are similar, some are very different. Lots of them don’t have shops like ours and they deal with people struggling in different ways. This includes helping people in poverty, abandoned children, women escaping abusive relationships and families escaping war affected areas.

You name it and it’s likely that there’s an Emmaus group somewhere helping these people. It was so interesting speaking to them and finding out exactly what they do and how they raise money to help support the people that they support. It was just really enlightening. 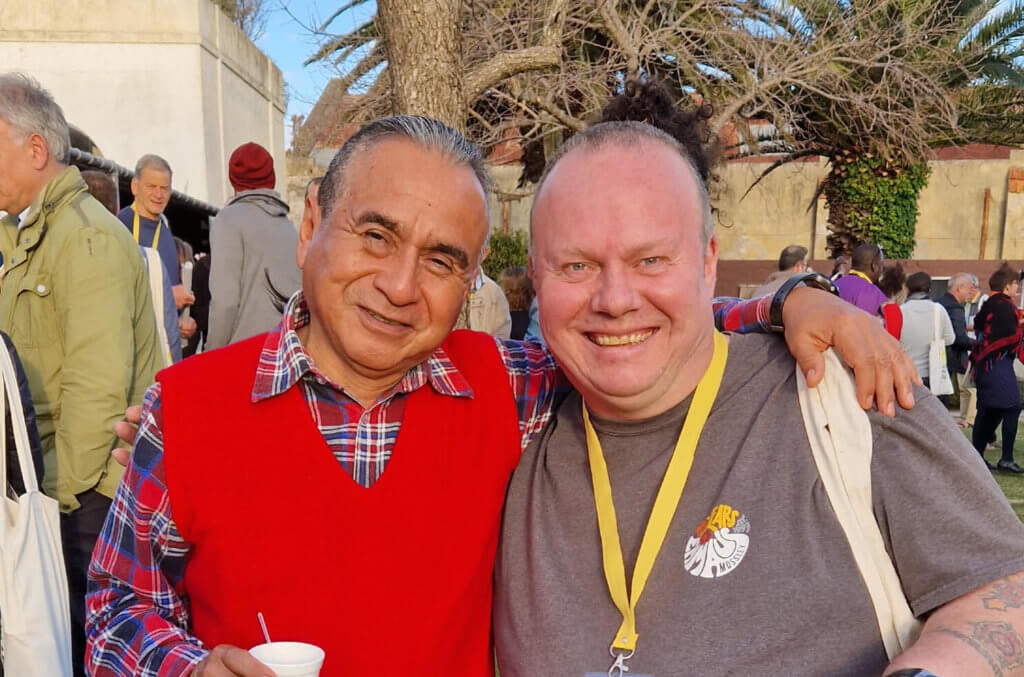 Past, present and future of the movement

The Assembly started with the unveiling of a plaque to mark an important moment in the history of Emmaus. A lot of you will know that Emmaus was started in 1949, after the Second World War, in France by Abbé Pierre. In 1963, after new Emmaus groups had been established in other countries, Abbé Pierre went on a trip to Latin America. It was on a journey between Uruguay and Argentina across the Rio de la Plata where Abbé Pierre survived a shipwreck. He was presumed dead, and it was only when they were dragging the bodies off the rescue boat that they realised he was still alive.

After this event, Abbé Pierre became aware that the Emmaus movement, which existed in 26 countries at the time, was reliant on him and Lucie Coutaz and that there was an urgent need to structure it. The new plaque in Piriapolis now marks this important event, a catalyst for Emmaus International being established. As well as the plaque, there was also the unveiling of a commemorative boat created by a local artist.

Over the next days, there were a lot of talks and debates from Emmaus representatives from all over the world. We also had workshops where we discussed how we’re going to do things in future, swapping ideas and learning from one and other. Along with talks and workshops, there was also voting on resolutions which will inform the direction of the Emmaus movement over the next few years. 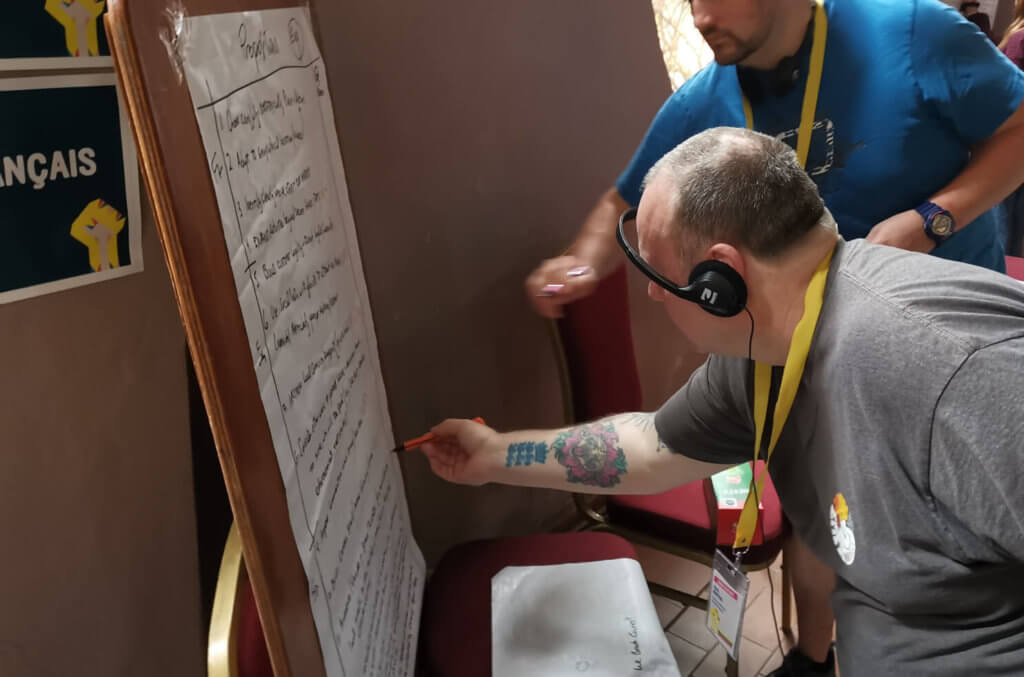 A memorable end to the week

On the final day, I went on a visit to an Emmaus group in Uruguay, Emaús Maldonado. This group collects furniture, electrical appliances, clothes and metals, and has an on-site workshop for carpentry and electrical items. The income raised is used to run the community and allows Emaús Maldonado to carry out other social initiatives.

In the evening of the final day we all went to an event at Montevideo City Hall in the Uruguay capital. The event included inspirational speakers such as Pepe Mujica, the former president of Uruguay, Tarcila Rivera Zea, an indigenous activist from Peru, and Olivier De Schutter, a UN Special Rapporteur on extreme poverty and human rights. The speakers discussed the recent Emmaus Global Report on the movement’s fight against poverty.

Lots to bring back

The main thing I took from the week was knowledge. In the UK, Emmaus is very much focussed on homelessness, whereas in other countries, Emmaus does so much more. One of our main taglines is ‘help first those who suffer most’ and it doesn’t matter if you’re homeless, escaping an abusive relationship, lost family members to war – these people who have been affected by some terrible events, Emmaus will in some way try and help them.

I’ve brought back lots of knowledge and ideas to share with the community at Emmaus Mossley. We’re already very focussed on solidarity but off the back of the Assembly, I’m going to try and bring the work of Emmaus groups abroad more to the attention of our community and supporters locally. 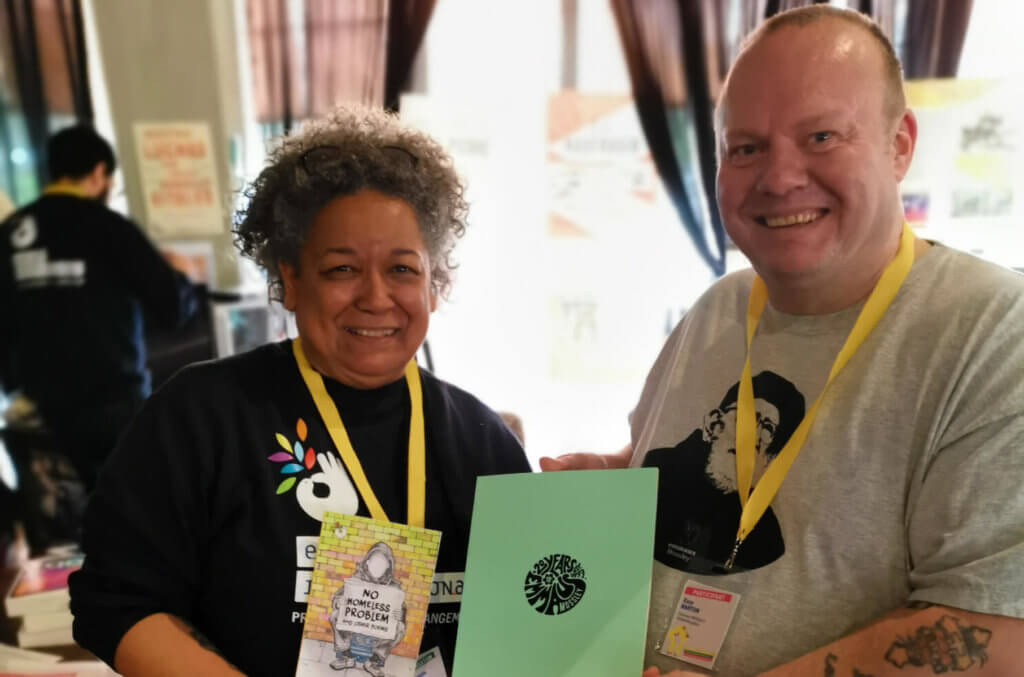