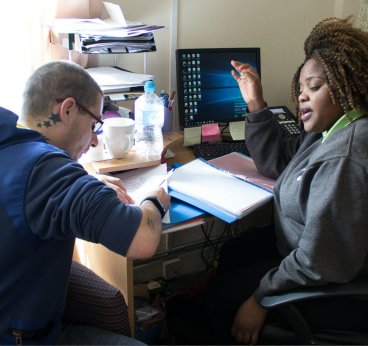 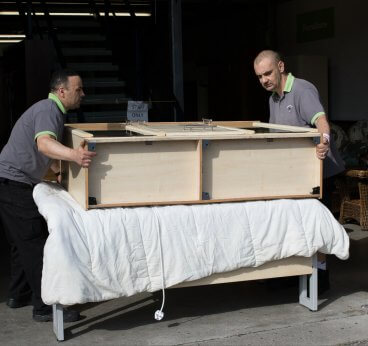 "Emmaus has changed my life really. I wouldn’t be where I am now, with my kids, without this place."

I lost my kids to social services in 2015 and I went on a downward spiral from there. A couple of years later I became homeless, sofa surfing back and forth between different places. I ended up in a hostel which then sent me to a charity where I didn’t settle at all.

I’d never heard of Emmaus but the charity I was at referred me to Emmaus Merseyside. It was my last hope really because there was nowhere else for them to put me. When I first joined Emmaus Merseyside it was hard work to begin with because I didn’t know anyone. I’m quite lively and the sort of person who makes friends very quickly so I soon settled in.

At Emmaus Merseyside I was mostly working in the charity shops, dealing with customers. It was a new domain for me because I was a support worker before and had never worked in a shop. It was totally different but because I enjoy talking to people, I was in my element really.

I was at Emmaus Merseyside for 18 months before joining Emmaus Preston in July 2019. In Preston I’ve settled much easily, made a lot of new friends and I’m enjoying my time here. I’ve been working in all three Emmaus Preston stores and doing lots of different roles. This suits me down to the ground because I don’t like to be doing the same thing over and over again as I get bored quickly. The thing I really enjoy the most is interacting with the different Emmaus customers.

Whilst I’ve been with Emmaus I’ve done plenty of training courses. These include fire marshal, first aid, food safety, customer service training and a City & Guilds PAT testing course. Recently, Emmaus supported me with the space and time to achieve an A* in Health and Social Care, and grade 6 English and grade 4 maths GCSEs. I’m now looking forward to studying an access to university course so I can go on to a social work degree..

I’ve got a lot going on at the moment in my personal life including seeing my kids at some point. This wouldn’t be a possibility without the support I’ve been given at Emmaus. I wouldn’t be in a place in my head where I could do that, so coming here was the best move for me.

To anyone who is homeless I’d say give Emmaus a go. You don’t lose anything by trying and if it doesn’t work out, at least you can say you went down that path and tried it. For most people, they can find their place at Emmaus and get the support they need.

Emmaus has changed my life really. I wouldn’t be where I am now, with my kids, without this place. My message to those who support Emmaus is thank you. You help everyone who lives in our community and basically you’re helping to give people new lives.